Six & Eight tells the story of six women convicted by the crime of drug dealing known as “burriers”. Coming from different countries, these women have in common the same sentence: six years with eight months, and the sadness of being far from their children. This documentary is about the motivations that these women had to enter the illicit drug business as well as their fears, regrets and efforts to make the prison a worthy place to live.

This documentary takes a look at one of the most controversial cases presented to the Peruvian Truth & Reconciliation Commission. It is the case of Liz Rojas, one of the many anonymous victims of the war against terrorism in Peru and a model of courage and dignity, like those that often appear under adverse circumstances. Liz initiates a long journey, fighting with perseverance and courage to find her mother who has been unjustly taken away from her.

Juan is an ungainly and solitary man. He is no longer that eleven-year-old child from the Peruvian highlands, son of Domitila and stepson of the coward Fermin, who handed him over to fight as part of a terrorist group together with other children. A beautiful and heartbreaking story set during the violence that wracked Peru over the course of nearly two decades. 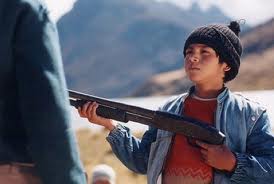