The Feast of the Goat (La Fiesta del Chivo)

Based on Mario Vargas Llosa’s novel The Feast of the Goat, with Isabella Rossellini and Tomas Milian. English dialogue

Santo Domingo, Dominican Republic, 1992. Urania Cabral returns to her city of birth. She barely recognizes the decrepit, mute and immobile old man she finds there, almost inert. He is her father, Agustin Cabral, aka “The Brain,” President of the Senate and right-hand man of the dictator Trujillo for many, many years, until his fall from grace. But that was long ago now. Urania looks back on these events 35 years later. She tells the story to her aunt and cousins, who cannot understand why it has been so long since she visited them, her family and her own father. Finally, Urania will confess the terrible secret that caused her to flee her home and family forever, a secret that destroyed her life for good. The Feast of the Goat is also the story of a group of men who sacrificed their lives to put an end to one of the bloodiest tyrannies in Latin America’s recent past. Their ordeal is interwoven with Urania’s in an intense kaleidoscope of love, hate, death, and violence. A film based on the extraordinary novel by Mario Vargas Llosa, blending a terrible personal drama with political conspiracy, an epic gesture and a tragic ending that marked a new era in the history of the Dominican Republic. 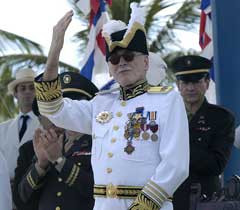